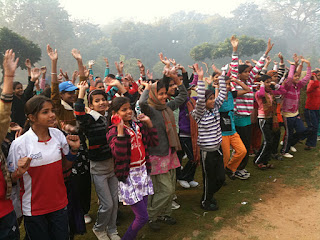 Several champions, including Sunita Godara, 1992 Asian Marathon winner, Prachi Tehlan, captain of the Indian netball team, incidentally picked as one the top 10 hottest sportswomen by NDTVSports.com and Achint Babbar, Special Olympics gold medalist swimmer, came together on Sunday morning, 18th December at Lodi Gardens to participate in a community fun run – Chal LEH Bhaag LEH. In a bid to support the idea of healthy lifestyles in metro cities, this initiative was staged by LEH LEH Sports, a venture focused on increasing access to participation in sports.

Participants included residents of Delhi from different sections of society, regular walkers at Lodi Gardens and 50 young and determined netball players from underprivileged backgrounds. As part of the Naz foundation's Goal Programme focused on development through sports (supported by the Australian High Commission), these young girls had a fun time doing warm up routines with Mrs Godara, Ms Tehlan and Kieron O'Brien, Head PE & Sports, The British School. Mr. O'Brien is bringing in pioneering methodologies and a professional approach to sports education at the school level.

"Initiatives such as these will bring in more awareness amongst citizens who have very little idea about fitness. Most live with wrong notions, and I'm happy to train them on new scientific methods of fitness," says Mrs Godara who has won the maximum number of medals by an Indian marathon runner.

Ms Tehlan thanked the team for inviting her to Chal LEH Bhaag LEH. "I enjoyed it a lot and look forward to many such activities as I am a keen supporter of anything to do with sport and fitness," said the 22-year old.

“We are pleased with the turnout and the enthusiasm shown by the participants to get involved in such a community initiative. This further validates our point of view that people are indeed keen to bring about changes in their lifestyles for the better and focus on health and fitness. Giving them opportunities to do so will also enhance the sporting culture in our cities and communities” said Siddharth Pandey, founder of LEH LEH Sports.

The name LEH LEH is inspired by the core values of the venture. Learning, Excellence and Happiness for all that come and play sports. Listening, Empathy and Humility from the perspective of how the company wants to run its business.